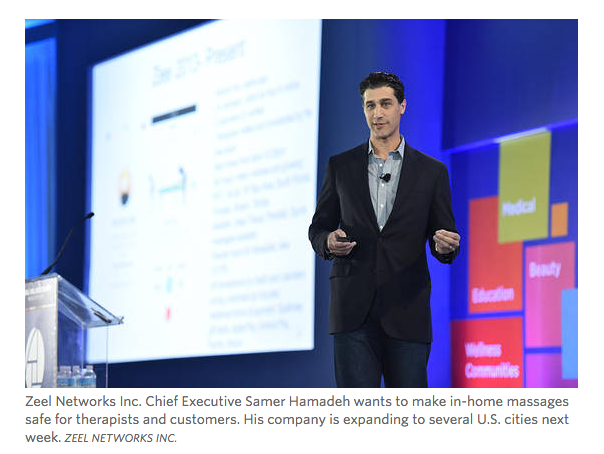 Zeel Networks Inc., an on-demand massage provider, has closed $10 million of a $12 million Series A round. The funding comes as the service, which is available in 20 cities, is slated to expand into three more areas. Zeel plans to launch in Phoenix, Austin and Seattle on Monday. Emil Capital Partners led the round, which has participation from Slow Ventures, Partech Ventures, New Atlantic Ventures and Spafinder. The company didn’t disclose its valuation but has raised $15 million to date. Zeel took a circuitous path to its on-demand massages business. When the company first launched in 2010, its founders envisioned it would be a service like ZocDoc but for alternative medicine. Instead the team quickly noticed half the bookings the company received were for massages. They also observed that more than 50 % of the 25,000 bookings they received were for massages in the next four hours. As the team pivoted into on-demand massages, it moved to address concerns of customers and practitioners. The company also thought it could get the best therapists if it could provide them a feeling of security. The app requires customers to prove their true identity using a social security number or a scan of a government-issued ID. Zeel Chief Executive Samer Hamadeh said this discourages bad behavior among clients. “The whole industry was screaming for a service to do this,” Mr. Hamadeh said. Unlike other on-demand services, the Zeel app also lets customers know how much of the amount they paid actually goes to the therapist. Mr. Hamadeh said this encourages customer loyalty because they know the therapists are paid well on the platform. Zeel is one of several companies that have realized there is a large market for on-demand massages in the home. Mr. Hamadeh said he knows of at least a dozen startups in the category. Soothe Inc. raised $35 million in Series B funding earlier this month. Soothe also acquired competitor Unwind Me in the fall. Correction: A previous version of this article said Zeel raised $11.5 million to date. The company has raised $15 million to date.