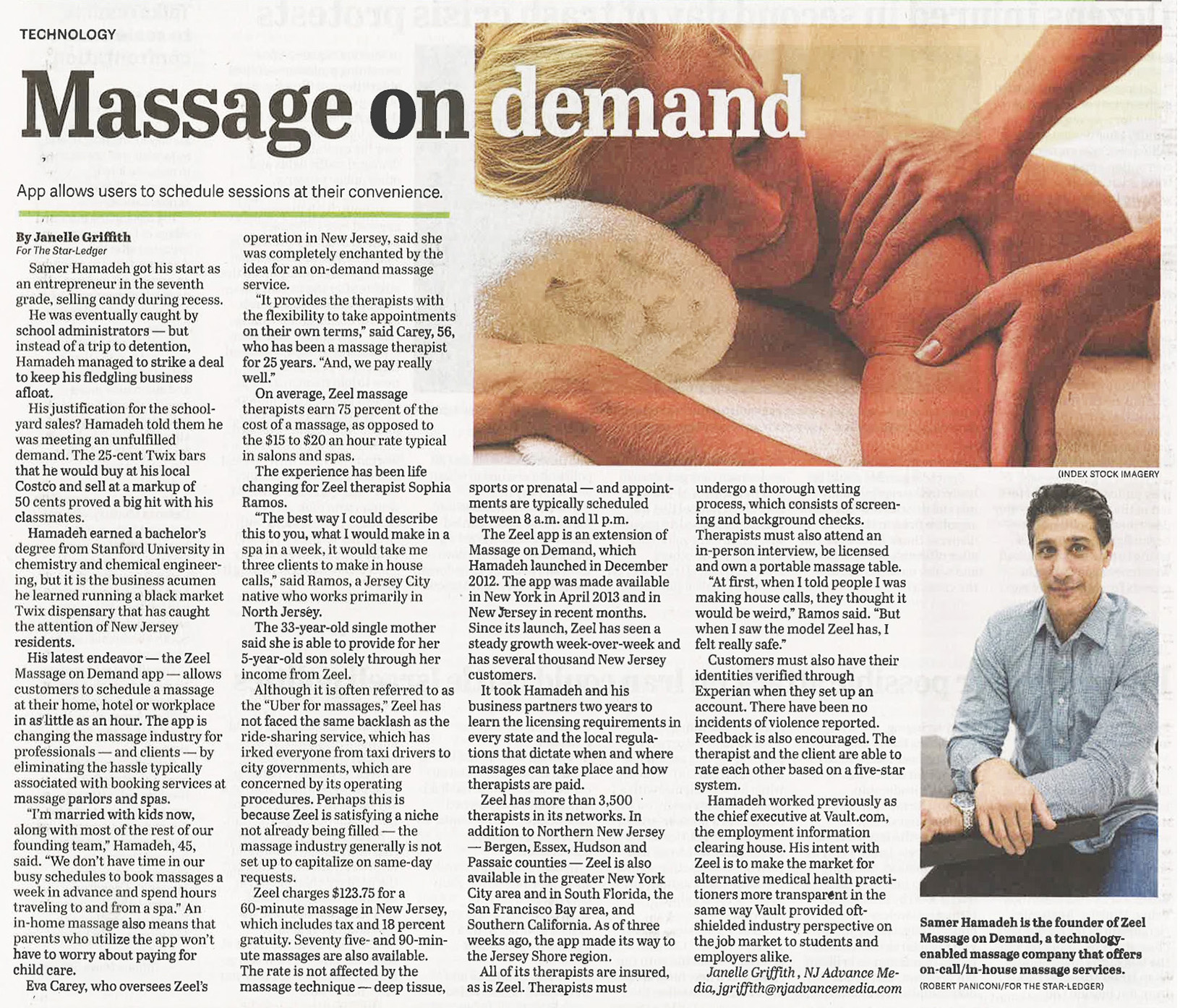 Samer Hamadeh got his start as an entrepreneur in the seventh grade, selling candy during recess. He was eventually caught by school administrators — but instead of a trip to detention, Hamadeh managed to strike a deal to keep his fledgling business afloat. His justification for the schoolyard sales? Hamadeh told them he was meeting an unfulfilled demand. The 25-cent Twix bars that he would buy at his local Costco and sell at a markup of 50 cents proved a big hit among his classmates and fellow students. Hamadeh earned a bachelor's degree from Stanford University in chemistry and chemical engineering, but it is the business acumen he learned running a black market Twix dispensary that has caught the attention of New Jersey residents. His latest endeavor — the Zeel Massage on Demand app — allows customers to schedule a massage at their home, hotel or workplace in as little as an hour. The app is changing the massage industry for professionals — and clients — by eliminating the hassle typically associated with booking services at massage parlors and spas. zeel-app-massage-on-demand.jpeg Samer Hamadeh, founder of Zeel Massage on Demand, a technology-enabled massage company that that offers on call/in-house massage services. (Robert Paniconi | For NJ Advance Media) "I'm married with kids now, along with most of the rest of our founding team," Hamadeh, 45, said. "We don't have time in our busy schedules to book massages a week in advance and spend hours traveling to and from a spa." An in-home massage also means that parents who utilize the app won't have to worry about paying for child care. Eva Carey, who oversees Zeel's operation in New Jersey, said she was completely enchanted by the idea for an on-demand massage service. "It provides the therapists with the flexibility to take appointments on their own terms," said Carey, 56, who has been a massage therapist for 25 years. "And, we pay really well." On average, Zeel massage therapists earn 75 percent of the cost of a massage, as opposed to the $15 to $20 an hour rate typical in salons and spas. The experience has been life changing for Zeel therapist Sophia Ramos. "The best way I could describe this to you, what I would make in a spa in a week, it would take me three clients to make in house calls," said Ramos, a Jersey City native who works primarily in North Jersey. The 33-year-old single mother said she is able to provide for her 5-year-old son solely through her income from Zeel. Although it is often referred to as the "Uber for massages," Zeel has not faced the same backlash as the ride-sharing service, which has irked everyone from taxi drivers to city governments who are concerned by its operating procedures. Perhaps this is because Zeel is satisfying a niche not already being filled — the massage industry generally is not set up to capitalize on same-day requests. Zeel charges $123.75 for a 60-minute massage in New Jersey, which includes tax and 18 percent gratuity. Seventy five-and 90-minute massages are also available. The rate is not affected by the massage technique — deep tissue, sports or prenatal — and appointments are typically scheduled between 8 a.m. and 11 p.m. MORE: How the professional cuddling industry made its way to N.J. The Zeel app is an extension of Massage on Demand, which Hamadeh launched in December 2012. The app was made available in New York in April 2013 and in New Jersey in recent months. Since its launch, Zeel has seen a steady growth week-over-week and has several thousand New Jersey customers. It took Hamadeh and his business partners two years to learn the licensing requirements in every state and the local regulations that dictate when and where massages can take place and how therapists are paid. Zeel has more than 3,500 therapists in its networks. In addition to staff in Northern New Jersey — Bergen, Essex, Hudson and Passaic counties — Zeel is also available in the greater New York City area and in South Florida, the San Francisco Bay Area, and Southern California. As of three weeks ago, the app made its way to the Jersey Shore region. "The app is also useful for our customers who want a massage away from home," Hamadeh said. "Perhaps they're visiting the Jersey Shore for the weekend and want a massage at their beach house." Zeel has proven as convenient as it has safe for clients and professionals, according to its founders. All of its therapists are insured, as is Zeel. Therapists must undergo a thorough vetting process. Therapists must also attend an in-person interview, be licensed and own a portable massage table. "At first, when I told people I was making house calls, they thought it would be weird," Ramos said. "But when I saw the model Zeel has, I felt really safe." Customers must also have their identities verified through a third party verification company when they set up an account. There have been no incidents of violence reported. The therapist and the client are able to rate each other based on a five-star system. Hamadeh worked previously as the chief executive at Vault.com, the employment information clearing house. His intent with Zeel is to make the market for alternative medical health practitioners more transparent in the same way Vault provided oft-shielded industry perspective on the job market to students and employers alike. He is hopeful he can work out the kinks to make Zeel an international business.