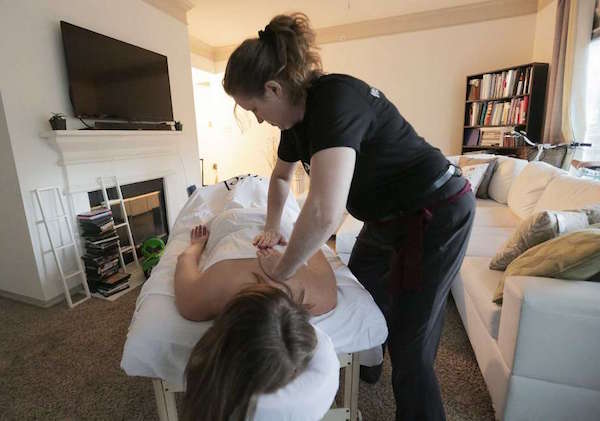 Margaret DeWyngaert gets a home massage from therapist Rebecca Hanson. For Zeel, the on-demand massage service, the recent spike in business is "truly due to the election," says company spokesperson Cynthia Irons. Mostly, clients are booking Swedish massages--the go-to for stress relief. All around Houston, a deeply blue city inside a bright red state, people who didn't support Donald Trump are feeling anxious. Facebook statuses are long and heartfelt. Counselors' appointment books are filled. And muscles are tight. "We saw a huge uptick in bookings leading up to the election, and it's continued on after," says Cynthia Irons, a spokesperson for the on-demand massage app Zeel. "What we saw wasn't a spike from seasonality or day of the week," she says. "It was truly due to the election." Mostly, clients are booking Swedish massages — the go-to for stress relief. Houston, of course, isn't alone: Anxiety has been building across the nation all fall. In October, the American Psychology Association found that more than half of American adults reported the election was a significant source of stress. But rather than dissipate after Election Day, the agitation has reached a fever pitch. "I could tell you from every vantage point that people are even more stressed — some people are practically freaking out –- at the election results," said Janie Feldman, a public education campaign coordinator for the APA. "We see this in the flurry of activity in social media. We see it as psychologists in our practices, and amongst other psychologists as well. We see this in the protests and the marches," Feldman continued. "It appears as though there are a lot of people who are beyond stressed –- they're scared. They're fearful of losing rights; they're fearful of losing privilege, and that from day one, life is going to change in a huge way." In the day and a half after Donald Trump won the presidency, Dr. Kenneth Arfa saw anxiety and depression peak among members of the student body at University of Houston. In his office at the university's psychiatry clinic, he met with an honors student concerned about how changes to the Affordable Care Act would affect her access to treatment for her pre-existing condition, bipolar disorder. He also met with a transgender student worried about her safety, a student who feared her mother would never be able to visit from Mexico again, and four women who said the election results triggered memories of trauma they experienced as victims of date rape. And that's just one office. Other professional counselors at the university have heard similar stories from one of the nation's most diverse student bodies. This year, according to UH data, the number of crisis appointments and calls increased by 37 percent over last year, from the beginning of the fall semester through this week. And the number of students seeking these services grew by 27 percent, meaning more people are having more problems. "We have a population that has a reason to feel anxiety at this time, based on what we heard during the campaign" said Norma Ngo, director of counseling and psychological services at the university. "It's a heightened anxiety, and I would go as far as to say for some students, it might even trigger any prior trauma or PTSD – for some, not for all. For others, it might be the first time they're feeling a high level or anxiety and panic." Some students just seem sad. Others can't sleep. A few have lost their appetite. And for many, Ngo says "there's a paralysis of not knowing what to do, of feeling unmotivated or stuck." "I think some people are experiencing something akin to a loss of a family member. A huge loss that feels like you're losing a part of yourself," says Feldman, of the APA. "When that loss is added to the fact that it seemingly came out of nowhere, that's where the surprise came from. And the loss is personal and deep and heartfelt, because people are feeling as though someone or something really big and important is gone from their lives." It's different than in previous election cycles – even close ones like when President Barack Obama edged out Mitt Romney in 2012 to keep his seat – because of the unusually wide divide between sides on issues, including immigration, religion and healthcare, that affect Houstonians on a deeply personal level. "A question I keep hearing is 'What will happen to us?'" says M.J. Khan, president of the Islamic Society of Greater Houston. For members of the society, Trump's rhetoric about banning Muslim immigrants from America has deep implications. "Some young people are telling their parents that they were told they'd have to move out," says Khan, who adds that this has been the No. 1 topic of conversation in every household and at every party this year. "People are asking what is going to happen, and they're concerned. There's anxiety about what a Trump presidency could be all about, and what it means. But we don't have answers yet." For some, waiting for those answers only makes the stab of anxiety sharper. "It's the fear of the unknown that contributes a lot of anxiety and stress for people. It's the idea that if I know what it is – good or bad – I can mentally and emotionally prepare to some degree," says Ngo. But with cabinet appointments just beginning to trickle out, and preliminary interviews only showing glimpses of Trump's plans, question marks hover in the air, along with what one of Ngo's colleagues, Dr. David Stern, calls a "cloud of gloom." Ngo says she's not sure when the cloud will go away.