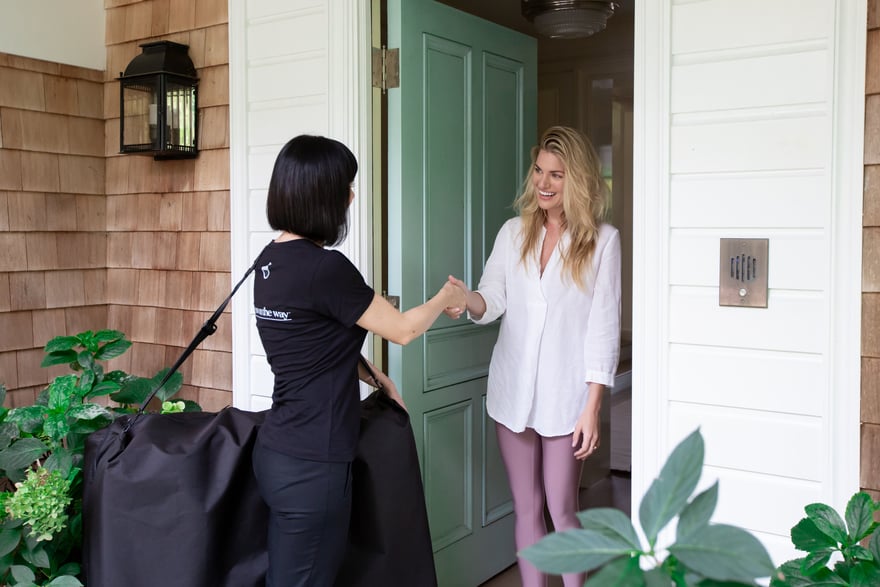 How An Investigative Reporter's Busy Schedule Inspired Her To Launch Zeel

Alison Harmelin co-founded Zeel, the largest centralized massage-on-demand provider and the first company to connect customers with same-day, in-home massage providers, with her husband, Samer Hamadeh. Hamadeh had just sold his most recent start-ups and needed a change of scenery. The couple packed themselves and their two young children and headed across the pond to Paris, where they settled for a few months. They were both getting older. Harmelin had just went through two pregnancies in 18 months. They both needed a massage. But with “what time?” they asked. That is where the idea for Zeel began. Harmelin told American Spa, “If Uber can send a car anywhere in the world, why can’t we send a person?” Harmelin’s career before Zeel was an unconventional start to the wellness industry. For more than a decade, she worked as an investigative reporter for NBC News in London and CBS News in New York City. Her work included live reporting of the aftermath of the September 11 attacks, the London Bombings, Hurricane Katrina, the Collapse of Bear Stearns and the 2008 financial crisis, and Superstorm Sandy. In 2003, she was nominated for an Emmy for her investigative series on child sex trafficking on the internet. In the first few years of Zeel’s existence, Harmelin worked behind the scenes. In 2010 when the company began, it was not common for husband and wives to co-operate a venture capital business, and Harmelin was also still working in her first passion – journalism. Eventually, she knew it was time for her to move on, and Harmelin and Hamadeh both publicly lead the company despite potential backlash. “I left journalism, but journalism left me too,” says Harmelin. She now leads the trust and safety department of Zeel, crediting her background as an investigative reporter for allowing her to develop a creative mindset in trust and safety that ultimately led to the creation of Zeel. ZeelInviting someone into your home to give you a massage is daunting, especially for women. That is what led Zeel’s trust and safety division to develop a more robust vetting and hiring process than many companies within the gig economy. In fact, less than 50 percent of applicants are approved to work at Zeel. State licensing for massage therapists at Zeel is just the beginning of the company’s vetting process. Each applicant must submit a resume and have a Skype or in-person interview with a community manager before going through an artificial intelligence (AI) driven online presence assessment. Soon, Zeel will also beta test an ongoing background check for their employees and applicants, being only the second company to do so, the first of which being Uber. Not only did Harmelin prioritize this in the company, but she also called on prior connections to make the process what it is today. The head of the trust and safety team is a female private investigator, which she met during her time as an investigative reporter. “If you spend enough time as a crime reporter, or any sort of law enforcement adjacent field, you get a little paranoid,” says Harmelin. “I may have started out like that. I don’t know which came first, the chicken or the egg, but it is really important to anticipate things before they go wrong, and we can’t do it perfectly. We are trying really hard to make sure that all of the right pieces are in place for things to go right as often as possible.” Her process is working. Massage therapists at Zeel have an average of a 4.76 out of five rating. This is no easy feat for the approximately 11,000 therapists who are performing at least 1,000 massage appointments a day, across 94 cities around the world. Looking back, Harmelin thinks about those who were concerned with her playing a bigger role in the company, particularly those in the venture capital community. “Really? That was your concern?” she told American Spa. For women, whether they are starting a career or have a longtime profession, Harmelin encourages them to not listen to this kind of thinking, and to not let anyone get in the way. “Motherhood only enriches your career," Harmelin said. "I had real concerns, especially before the birth of my first son that I would somehow lose my edge after having a child. At the time, I was a crime reporter and I traveled constantly for breaking news. What I learned is that the connection to my baby, the experience of nurturing someone other than myself and the connection to all women and to all parents, helped me tell a better more compassionate story. The same holds true for co-founding a company. A mother of three has a very different perspective on hiring, work-life balance, and so much more as the result of being responsible for the health and wellness of three small people.”