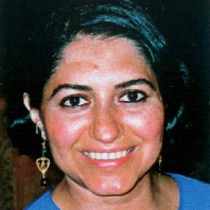 Jacklin Arastouzadeh is a licensed acupuncturist and master herbalist. With roots in Beverly Hills, Calif., she caters to a variety of concerns with her time-tested approach, treating the cause, not the symptoms, of health issues.

“In my clinical practice, I am often confronted with questions from my patients about Chinese medicine,” says Jacklin. “I would like to share some of the answers, help my patients to gain confidence and trust, and together achieve healing results.”

Jacklin began her career in health and wellness with an undergraduate degree in psychology and pre-med studies from UCLA. In preference to traditional Western practices, she decided to pursue a whole-body approach to healing.

By the 90s, Jacklin had received her master's degree in Traditional Oriental Medicine from Emperor's College. She later served as an assistant proctor for the NCC for obstetric, gynecological and neonatal nursing specialties, and began her work as a research acupuncturist at UCLA Medical Center. These experiences solidified Jacklin’s belief in the power of Chinese medicine.

“A lot of people don’t realize they have control over their diseases,” Jacklin says. “I encourage all my patients to tap into the healer within themselves.”